LAUNCHED IN 2011, MATT MCAULEY AND BRAIN MCPECK’S BAND TV BABY HAS WORKED ITS WAY THROUGH

PROJECT WITH DEEP ROOTS IN THE CITY’S DOWNTOWN SCENE.

about the first release by Deus Records and how everything started.

How did you two meet originally?

Brain: Matt moved to my town in the 7th grade. My chronological memory is hazy but in some order, we got into a fist fight in the back of math class, and also bonded over Guns N’ Roses “Appetite for Destruction,” which had just come out.

Tell me about the transition from A.R.E. Weapons to TV Baby – how did that come about?

Matt: We definitely still consider A.R.E. Weapons to be functional – just on sleep mode, but I was singing more and more Weapons songs, which i really enjoyed. I wanted to sing more but did not want to conflict with what that band was already doing. Brain: This coincided with me turning into a guitar geek all around the recording of [A.R.E. Weapon’s fourth album] Modern Mayhem. Also, the music was a bit less aggressive, possibly reflecting some sort of shift in art/mind state. We do have a bunch of Weapons songs hanging around though…

Can you describe the first time you performed as TV Baby?

Matt: I played by myself at Pianos [in the Lower East Side]. Did about five songs with a backing track. I sang and danced and had myself a fine time. I believe the audience was also entertained, but who can know another man’s mind. I have pretended to like many things I did not care for and I believe scores of people have looked me right in the eyeball and lied without flinching. Brain: First time we performed together…I’m blanking. Matt is the more accurate keeper of the oral history.

How do you think the band has changed/evolved from that first show – particularly in terms of the performative aspect?

Matt: Brain coming on board immediately made it much better. The performative aspect has evolved as the music has gotten stronger. Where once we may have felt the need to get by primarily on raw energy, now the music does a lot more of the work for us and we can use the energy more strategically to better effect, which gives us a looser feel and more room to bond to the audience. Brain: There was focus on raw freak energy. We may, and I stress may, be more musical now. We definitely have more moves.

Where does the name come from anyway?

Brain: Matt’s call on that one. I like to think it comes from the line at the end of Drugstore Cowboy, but i don’t think Matt does. It’s also an Allen Ginsberg book/poem… and probably a bunch of other stuff. Matt: I was a latchkey kid. I spent a lot of time alone growing up watching TV. That is basically where that name comes from culturally, so it fits me. But I like using ideas that have multiple meanings and possible sources. I was aware of the Ginsberg book and the character from Drugstore Cowboy, both of which are drawing from the same loose idea as mine. I also always liked the possible connection to transvestism for several reasons, chief of which is as an ode to Lou Reed’s inclusion of that imagery in some of his work. People always ask me about the other [meanings] but no one ever picks up on that one, except for transvestites, which just goes to show that solipsism is the ground floor of human nature.

Matt, you have killer dance moves and always do awesome/hilarious/unexpected stuff onstage – is all of that spontaneous or do you think about how it’s going to go beforehand?

Matt: So far its completely off the cuff. I repeat things sometimes but not by design. I always intend on planning things out and even practicing, like, a routine, but truth be told I am, in many respects, a lazy, lazy man.

You also have some diehard fans that are even more insane than you are. What’s the craziest thing a member of the audience has done at one of your shows?

Matt: Between this band and A.R.E. Weapons I have seen some great audience participation (wheelchair dancing, stripping, rolling in broken glass, hugging and kissing, dousing themselves in alcohol) I would hope we foster an atmosphere where people feel free to do what they feel, whether it’s getting buck wild or sitting silently with your eyes closed. I am really not the kind to tell others what to do, I’m just glad that they are there.

I think TV Baby is a New York Band (whereas some other bands are simply bands from New York). Would you agree that TV Baby is inherently New York-y? Why or why not?

Brain: Very much so. We’re New York guys, with New York ‘tudes. I believe in making music that feels like/sounds like your reality and geography. Matt: Brain and I are two people who gravitated to a spirit that is historically associated with New York, especially the ethos that drove the art here in the latter half of the 20th century. In that way we are New York to the bricks, as they used to say. That being said we are not nostalgists trying relive some imagined glorious past and I am not sure how we fit in or represent the reality of what the city is today.

How did you guys first meet [The Rapture’s] Gabriel Andruzzi? What do you think he brings to the new record?

Brain: We met Gabe in the 90s in DC. We had moved there, he was from there but had moved to Chicago. He brought a lot to the new record: cool synth and drum programming, an exacting attention to detail, and smart songwriting arrangement moves. Matt: Having him produce this record was like having another member of the band. He understands us pretty well and was able to get us to focus on the best parts of what we do. Brain: Also, he’s a fun guy and it was cool having someone to keep the vibe loose. Neither me or matt are especially loose in the recording environment.

How did you come to be working with the Deus guys and why did you think they were a good fit for this release?

Matt: Justin Miller, who is starting Deus Records, brought us in. I think the experience that everyone at Deus has expanding the reach of the things they are passionate about gives me confidence in our ability to successfully share our music with as many people as possible together. I am impressed by the way that they fully participate in rather than co-opt the cultures of the products they sell. The fact that they are able to do that in the worlds of real surfers and motorcycle riders, where bullshit toleration is extremely low tells me that they operate with a level of integrity that is rare. Brain: Everyone we’ve met on the Deus team is super rad.

What’s one thing about each of you people would be surprised to learn despite your “onstage personas?”

*AUTHOR: Allyson Shiffman is a writer and editor who lives and works in New York. She is features editor at Vs. Magazine and contributes to W, BULLETT, Nylon and BlackBook. 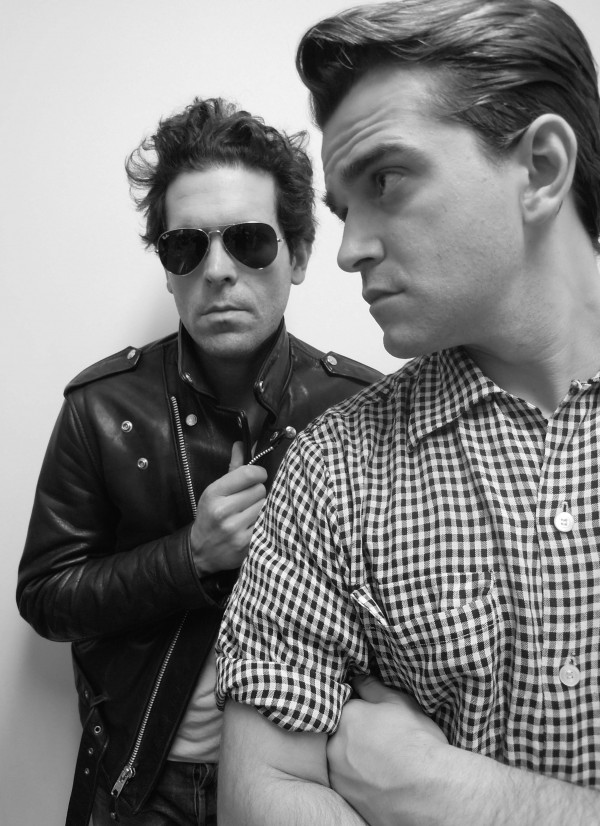