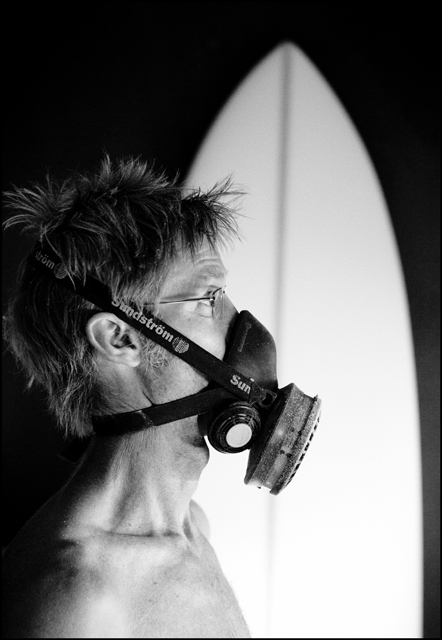 Chris Garrett is a strange character, and we don’t use strange in a bad way whatsoever…he’s just that guy who you can rely on to crack the most simple yet amusing jokes and has his own view on absolutely everything under the sun.

He shaped his first board in 1979 and acquired the bug from the get-go. Hailing from the gold coast of Australia the ‘Phantom’ as he is called by friends, set up a surf factory/showroom in Burleigh Heads in 1984. Said shop became an iconic surfers landmark for the next 20 years. As well as producing top notch foamcraft, the location also played hang out for wayward surfers, artists and alcoholic BBQ mongers on any given Friday.

Chris, who is probably one of the most experienced shapers out there and is known for his open minded approach to shaping boards, then moved his work to his home, a simple farm relatively off the grid. He raised a family, reared a clutch of chickens and grew his own veggies….shaping day to day as he has always done.

During a visit to Bali in 2011 the Phantom spent a little time in the shaping bay here at the Temple of Enthusiasm in Canggu. Something must have rubbed off on him because he returned a year later with his family in tow and is now our in house shaper.

Chris designs and crafts boards that constantly offer something a little different. Simple tweaks, carefully positioned channels and functional angular usage that add to performance and handling are some of the things he is well known for. His range is wide and his knowledge is vast. a couple of qualities we can definitely dig here at The Temple of Enthusiasm.