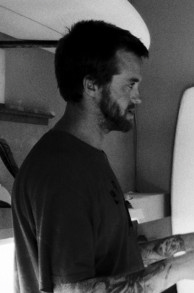 We are more than a bit spoilt at the Deus Temple in Canggu for a whole heap of reasons. One though is really near and dear. We have been extremely fortunate to have some great shapers pass through the carved teak java doors that lead to that inner sanctum, the shaping bay. Captains of the planer. Sultans of shaping. People like Bob McTavish, Thomas Bexon, Rich Pavel and Neal Purchase Jr., to name but a few.

Right now we’re especially excited to have Jeff McCallum in. Not because we love what he does, though we do. It’s because this time he brought his entourage. And a class act ensemble they are too.

The shaping maestro from San Diego California brought his good mate and right hand man,. Alex Villa Lobos. AKA The Laminator. The one who does all the fine glass jobs on McCallum boards. He’ll go crazy sick if you ask him to. Josh Oldenburg. The Apprentice. He’s got that disciple relationship going on with Jeff, but only on a work front. Absorbing as much of Jeff’s knowledge and wisdom as he’s humanly possible. Soaking up Alex’s skills and infected by a string of other great shapers who shared when they come a knockin’ on Jeff’s shed door.

Without wasting as much as a moment, McCallum and his men swarmed into the rear sheds at the Deus Temple in Canggu and pretty well took over, making themselves comfortable and for all intents, at home. McCallum popping the lid to his Pelican case to reveal the tools of his trade. He laid them to one side before shimming up the ladder & selecting a couple of blanks, he was into the shaping straight away. Then no sooner was he finished with his hand made masterpiece, and before the foam dust could settle, Alex sprang into action to give it a once over with the glass. Talk about a well-oiled machine.

These gents aren’t shy on the surf front either. Taking advantage of the swell that’s rolling through at present. The perfect punctuation; before, during and after, a day in the board bay. Jason ‘Salsa’ Salisbury hooked up with them out in the waters or our local break and was immediately intrigued by the board Jeff had under his feet.

After politely commandeered it he made a bee line out the back. Within minutes he was doing what Salsa does best and surfing the hell out of it. There was no shortage of water being pushed this way and that, all good signs that he was enjoying himself and this strange new vehicle. Later when he was coming back up the beach across the dark sands, you could just tell that he was more than a little beside himself with excitement, absolutely hooked on what this little machine was doing.

Now all he had to do was get one for himself.