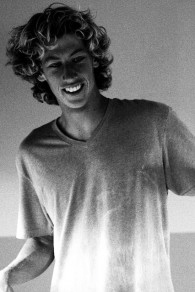 There’s this kid fooling around in the shaping bay madly mowing foam. Peeking in it’s clear that he’s shaping a board, though it’s not like anything we’ve seen before, And take it from us, we’ve seen some interesting craft pass through these doors.

At first glance he’s he could be mistaken for a grom gone mad with an electric planner. Closer inspection reveals that it’s Ryan Burch and he’s building himself something to take to G-Land. His own take on Asymmetrical.

We sit and chat on the slopped concrete just outside the shaping bay. He’s not what you would expect. Behind the youth there’s a clear astute mind and he’s powered by purpose. Shut your eyes and you could be speaking to someone twice as old.

“Have you ever noticed that when you walk down a hill you have less control than when you walk up?” “Well that is what an asymmetrical board is all about. You have more control on your front side, on your toes. On your heels it’s more brute force.”

Suddenly the idea of an asymmetrical board doesn’t sound so weird. Perhaps the most succinct explanation we’ve heard. Don’t let the long hair and board shorts fool you, he’s the real deal. Dare we say… almost sage like. You can tell he doesn’t go off half cocked.

Ryan came through Bali to go to his favourite Indoensian spot, G-Land. He loves it there. Though he hasn’t had it all time he says. He’s hoping that this will be his year. When we learnt he was about we had a chat and threw open the doors to the shaping bay. Without too much thinking he said thanks and disappeared inside for the best part of a week. Hold up honing a quiver for his assault. When he did reappear he’d pushed out a few boards for himself to take to Java. One of which was this beautiful red Asymmetrical.

But wait there’s more, and that’s what we’re super stoked about, he’s made a couple to put in the shop. Now this is not something he’s done a lot of before, preferring to build boards for his mates and himself. He’s by his own admission, not a shaper, moreover he’s a designer who’s testing the various theories he has on wave riding craft and at the end of the day he’s not sure if the rest of the world is into what he’s doing. Well we are! Just a word to the wise if your interested in step changing your surfing this might be for you.

After a month Ryan is back from G-Land and the other day dropped by the Temple to have a chat and let us know how it went. Still not all time he said, though we are not entirely sure. He showed us some images that someone had snapped of him over there. The resident photog. He kindly gave us a few of him on his little red board on some mighty fine looking waves. We think that his definition of all time and ours aren’t really on par.